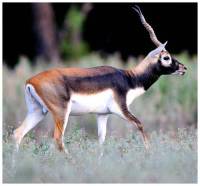 Black Buck Antelope, also know by several other names including Sasin, Kala Hiran and Indian Antelope are a species native to India, Nepal and Pakistan that have really found a niche on hunting ranches in the southern United States. States such as Texas with its year round warmer climate have been very successful in importing these adaptable antelope. Central Texas is one of the best hunting locations for this exotic species, with the Escondido Ranch in the forefront of offering this species to serious hunters from around the world.

The Black Buck Antelope has a unique set of horns that twist or corkscrew one to four times along the length of the horn. A trophy Blackbuck will have a horn length of up to 18 inches, although some of the older bucks can have horn lengths of 24 inches or greater. In addition the horns have circles or ridges all along the length, making a terrific head mount presentation. The horns themselves are very dark to black, thick at the base and narrowing to a fine point at the tip.  As the name implies the mature buck is very dark, almost a black color over the back and shoulders, with a white belly and lower side of the tail, white on the inside of the legs and white rings around the mouth and the eyes. The does are a fawn brown to reddish brown color and don't have the impressive horns associated with the bucks.

At the Escondido Ranch the habitat that the Black Buck Antelope thrive on is very similar to what is found in their native country. They prefer the open grassy areas and tend to avoid heavy forested areas or really rugged terrain. Ideally they prefer shorter grasses and sedge, but they will also graze on small species of brush. They often graze around the edges of patches of low brush and trees so they have access to cover if needed. The bucks and does are incredibly fast once they start moving, making hunting these antelope a challenge and a true test of marksmanship. In India and Nepal they are the fastest mammals and can outrun predators with virtually no problem. In Texas, especially on managed game ranches, the only predators that cause problems are the coyotes and this is only for animals that are old or ill or newborn fawns. This allows the bucks to develop to a good size with a showy set of horns, ideal for the trophy sportsman or woman.

Typically groups consist of one dominant buck and 15 or more does. They are more territorial than some of the game species and males will aggressively defend their territory from other males, especially during the breeding season. For larger herds the territory can be up to 12 hectares in size, with the doe groups moving between the male's territories. The younger bucks stay with the herds until they are approximately 2 to 3 years of age when they are run off by the dominant male.  Dominant males spend much of their time herding does keeping them away from other males.  Blackbuck meat is considered one of the best of the antelope species.  Many hunters take does for their beautiful hide and delicious meat.