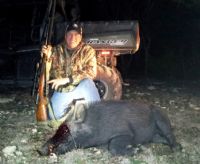 In case you thought that hunting wild hogs, also called feral hogs or wild boars is the same as hunting deer, you need to understand that hog hunting is a whole different ball game. These wild hogs are highly adaptable, intelligent and very suspicious about any changes in their natural environment. Hogs tend to have a predictable pattern or set of habits that includes areas where they are rooting and feeding, muddy or wet areas where they are wallowing and areas where they are bedding down. Learning the basic behaviors of the hogs in the area where you are hunting is important if you ever want to get even a glimpse of these animals. Hunting on a game ranch with guides that are familiar to the area is a great idea if you don’t have time to develop an understanding of the basic pattern. Hunting venues like Escondido Ranch in Central Texas have guides that are very familiar with the hog movement during different seasons, making a successful hunt much more likely.

Feral or wild hogs are somewhat similar to domestic types of pigs in appearance however they are not as heavy and tend to be more rangy and dark in color. They have coarse hairs covering the body and head. Immature wild hogs may be black or brown with stripes that run down the body, typically in a slightly lighter color than the rest of the coat. Like all swine the feral or wild hog has a flat snout, small eyes and predominantly large triangular ears. The males have four canine teeth that are positioned on the front corners of the jaw. These tusks are used for fighting and protection and can be fully curled tusks or they may protrude more from the mouth. These teeth grow continually and the constantly movement of the uppers against the lowers and vice versa keeps them sharp all year round.

The feral hogs are largely considered nuisance animals in much of the state of Texas because they reproduce at a high rate and damage fields and fences. Females will begin breeding at 6 to 10 months depending on the food supply. They will have one to two litters every year with litters of up to 14 piglets not uncommon in good environmental conditions and with older breeding sows.

The favorite habitat of the wild hog is wet land often along river bottoms, near dug outs or even along streams and low areas. They tend to eat grasses, fruits, meat and almost anything else they can find in the early morning hours along brushes patches and sheltered areas, then move into deep brush during the hot daylight hours. They are territorial and will typically move within a one to three mile square area, however in very dry conditions where food and water is scarce they can move over much larger spaces. They travel in groups called sounders which include juvenile males, adult and juvenile females and their young. Males over the age of 18 months to two years live by themselves and only join the larger groups during the mating season.

The meat from sows and young boars is excellent and much leaner than from domestic hogs.