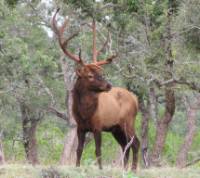 Those that have ever had the chance to hunt elk will tell you it is a one of a kind hunt. These magnificent animals are more than just a bit of a challenge since they are very intelligent and also naturally very agile and suspicious, it takes more than just luck to be successful as an elk hunter. Bulls can weigh up to 300 kg or 875 pounds and cows typically weigh less at 250 kg or about 550 pounds.

The elk, sometimes known as Wapiti, have a very typical coloration. The body is a light tan to buff color with darker brown colorations on the legs, neck and head. The bulls will have a long, shaggy covering of hair on the neck that is very distinctive. The belly is also very dark to almost a rusty black color and may be somewhat longer and shaggy, especially in bulls. The rump patch is large and highly visible, often a cream to white in color, especially in the summer season.

Usually only the bulls will have antlers, typically with five points but up to nine, that are shed on an annual basis. These antlers angle back over the head and are often carried close to the neck through the bull actually pushing his chin up to make the head parallel to the ground, this allows him to plow through trees and brush. The mature bulls antlers can weigh between 15 and 20 kgs or 30-40 pounds, which adds tremendous pressure to the neck, resulting in the head tilting for both comfort and ease of movement. The males will bugle loudly and very distinctly through the mating season or rut which run from mid September to mid October, and the cows will often answer with mewing and barking type sounds.

The Elk tend to form into smaller herds with a mature cow that leads the herd other than during the rut. They are a territorial animal with routine movements through grazing, bedding areas and watering holes. The elk herd always posts a sentinel or guard, typically a mature cow, that will keep alert while the rest of the herd rests and grazes. They have good eyesight and exceptional hearing, however they rely mostly on their sense of smell to alert them to danger. When hunting elk it is essential to monitor the wind direction and only approach from upwind. Although they are a large animal they are incredibly fast and agile, easily moving through rough terrain and densely forested areas.

Elk were originally a native species of Texas, especially in the areas around the Guadalupe Mountains, but became extinct some in the late 1700s and early 1800s. Judge J.C. Hunter actually imported Wapiti from Montana and released them back into the mountains in 1928. While the population initially did increase, Elk were put on the list of approved game in 1959 and since then the wild herds have greatly decreased. Parasite problems and several very dry summers contributed to the decrease in the herds. In Texas there are mostly managed game ranches offering elk hunting options.  The Elk on Escondido Ranch roam the entire ranch.  The bulls are hunted during the rut by bugle or cow calling.  After the rut the cows and bulls are hunted by ambushing from blinds overlooking river crossings or feeding areas.  Their all natural meat is delicious with a texture similar to beef but much leaner.