Is there any time that wild game hunting isn't allowed in Texas?

Depending on the species you are after there may or may not be a season in which you are able to hunt. Native species such as Whitetail deer, bull Elk and Rio Grande Tom Turkeys do have seasonal hunts that are controlled by the state. All other species on the ranch are open for

Weather in Texas is seasonably warm all year round so even January and February hunting can be done in temperatures of 50 degrees plus. This makes a nice change for hunters from other states that are dealing with below freezing temperatures.

How can I tell if there are wild game hunting times open at Escondido Ranch?

The website offers an interactive type of calendar system that is updated to clearly show the times that are not already booked on the ranch.

If you aren't comfortable using the website to check for available wild game hunting times, contact the office by phone or email to book your hunting block.


If I am only going to be hunting exotic species on Escondido Ranch, do I still need to get a Texas hunting license?

The answer to this question is absolutely yes! All hunters, regardless of the type of animal they are going after on the ranch will require a valid Texas state hunting license. Licenses can be obtained online or through several different outlets within the state including some retail venues. There are sporting good stores in Junction, just up the road from the ranch, that sell wild game hunting licenses. 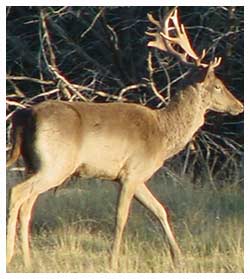 There are different categories of licenses depending on how long you are hunting for and whether you are a resident of the state or not. For non-residents only planning on hunting exotic, non-native species there is a 5 day special license or a general license that includes both native and non-native game and birds. Senior residents and youth hunting licenses are also available.

What is my chance of actually getting what I am wild game hunting for?

Regardless of the species you are planning on wild game hunting you can be assured that the staff of Escondido Ranch is committed to your success. Since they are all experience hunters and are very familiar with the game habits on the ranch they will have you in the right blinds at the right times to maximize your opportunity to get a shot off at just the animal you are looking for. If you are staying for a few days you will, of course, increase your chances of getting that trophy animal since you have more time to actually see the herds and make a determination on which trophy head you want to take home.

Over the years as a managed hunting ranch, Escondido hunters can boast over 90% success rate in having a very successful wild game hunting trip. Be aware that your shooting ability will also come into play, but you will certainly see the game and have an opportunity to bring home your limit regardless of the species you are after.


Why is hunting from a blind the best option for trophy black buck hunting?

Hunting from a blind has several advantages that stalking or tracking simply doesn't have. The first and most obvious benefit is that the blind is permanent, allowing the black buck antelope to become used to it being there and not become spooked or hesitant because there is something different in the area. These animals are highly suspicious of changes and nervous by nature, so blinds that are set and consistent around game trails and feeders are going to give you the best opportunity to be close enough to get off a shot.

The second benefit to blinds is that they are always set up in areas where the black buck antelope move. Guides on Escondido Ranch are familiar with the movements of the herds over the entire ranch, meaning they have a good knowledge base as to where the herd can expect to show up. Positioning yourself in the right spot at the right time is more than half the battle in being able to hunt these beautiful but very challenging animals. 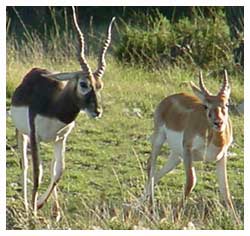 How did trophy black buck hunting in Texas get started?

As with all exotic species in Texas or any other state the first breeding groups of black buck antelope were imported by ranch owners for the specific purpose of establishing hunting herds. Since their first introduction to the state they have really established themselves.

Exotic hunting in Texas has now moved from a relatively rare occurrence to something that hunters from all around the United States, Canada and even overseas countries plan to do every year. Trophy black buck hunting is one of the more popular species hunts on managed ranches throughout the state. The quality and size of the herd at Escondido Ranch means that hunters are sure to get all the excitement and opportunities for trophy black buck hunting that they want, every time they hunt.

What is the most challenging issue with trophy black buck hunting?

It may be hard to narrow the challenges with hunting this antelope down to just one. Perhaps the biggest issue is how smart and alert these animals are, making them difficult to sneak up on. Since Escondido Ranch uses blinds, this issue is virtually eliminated from a major concern, but of course hunters have to be still, very quite and extremely patient as the animals approach.

The second challenge is that trophy black buck hunting requires an excellent shot. These animals aren't going to stick around to give you a second chance if you miss the first time. They are fast, able to jump, and very athletic when they are on the move, meaning that the first shot needs to be the one that counts.

What makes trophy Axis deer hunts so successful on the Escondido Ranch? 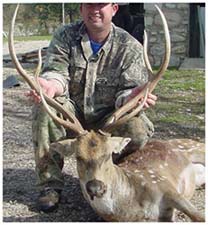 Perhaps the single biggest advantage that Escondido Ranch has with regards to trophy Axis deer hunts is the river that flows through the lower part of the ranch, giving almost two miles of the exact terrain that the Axis deer loves. Since they like to spend time by the water and graze in the areas around water and around brushy areas, the riverbed is absolutely ideal for the species. Blinds that are placed in strategic locations along the river bed provide hunters the opportunity to get right to where the deer want to be, ensuring they will have a shot at bringing home a trophy axis deer. Hunts are conducted at the opportune times of the day, early morning and dusk feeding times, where guides can get the hunters settled into the blinds to wait for the big bucks to show up.

How big are the antlers seen on the deer taken at the Escondido trophy Axis deer hunts?
Escondido Ranch has been a managed exotic and native species ranch since 1980. This has allowed the ranch game managers to consistently build up a herd of both does and bucks, ensuring a good selection of trophy Axis deer hunts per year. It is not uncommon for hunters at Escondido to bring home a trophy Axis deer with 30 to 36 inches of main beam antler, making them a truly spectacular species for a full head mount or an antler only mount. Some may have longer brow tines and even secondary tines, but this will vary from buck to buck. The antlers tend to be very mellow and tan in color, making a nice addition to any trophy room wall.

As with any type of management, hunt numbers will vary based 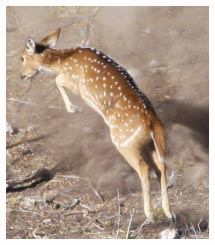 on what the staff knows is available and how many of the large trophy Axis deer hunts are held during any one year. This management carefully monitors the numbers of trophy sized deer that are available as well as the younger bucks that are coming up for hunting in future years. Balancing the population of the entire herd only helps to provide hunters each year with an outstanding opportunity for bringing home a trophy set of antlers.
What is the average size of the bucks taken on trophy Axis deer hunts on the ranch?
Axis deer are moderate in size with most of the larger trophy size bucks ranging in weight from 160 to 200 pounds, providing lots of meat as well as a beautifully spotted hide for tanning with or without the hair. Axis does, like the bucks, provide both beautiful hides as well as some of the best tasting venison you can imagine. Does are typically smaller and lighter, but still no less of a challenge to hunt. Does don't, of course, provide the trophy antlers that the bucks do but they are still considered a highly desirable game animal for their meat and hides.