The scene was set for a beautiful post Christmas hunt at Escondido Ranch. Our objective was simple because we had an uninvited guest show up on the ranch several weeks ago and we needed to take him out. After much analysis, the conclusion was that we were hunting a rogue Red Deer. The deer obviously heard many of the Elk that reside at Escondido Ranch bugling and decided it was greener on the other side of the fence and decided to join them.

The problem with this new guest is that he can actually inter-breed with our Elk. Since Escondido Ranch prides itself in having pure Wyoming Elk genetics we could not risk the possibility of contamination. Therefore, the ranch owner called in his two most aggressive and successful hunters to take care of this immediate problem.

As we made our final preparations for the hunt the question came up of "who is going to shoot this animal?" My buddy and I looked at each other and reassured the ranch owner that we had it all under control. One of us was going to attempt the shot and the other would film the hunt. Sounds good right? So we set out that morning in a tower blind to give us the best chance to at least see the animal and then we could make adjustments as the morning progressed. We got in the blind about 6:30 A.M. that morning and nothing was moving. Sometimes when it gets really cold overnight the animals won't get up and start moving until the sun is up and warming the ground, around 8:00 or 8:30 the next morning. In our situation, we felt like we had a limited amount of time to get this deer on the ground because we needed to do it before he dropped his antlers in a few weeks. We decided to get in the pickup and start driving around and see what was moving on the other side of the ranch. As we were driving, we noticed that some really nice Sika deer were feeding in an open field nearby so we stopped to take a few pictures. We were glad we did because we ended up taking some pictures of a really nice mature, gold medal trophy Sika buck, that was somewhat hidden behind some cow elk initially. Photographing the Sika was nice but we had a job to do and we knew time was of the essence.

As we continued down the road we slowed down as we came up to an area where the infamous red deer had been spotted earlier in the week. Am I glad we did because there he was. He saw us immediately and fled in a direction that he thought was conducive to his survival, his home in a steep canyon. The deer was moving pretty good when he crossed the road we were traveling. He proceeded into an open field with quite a few oak trees and turned back to look at us as if to say "I am going to make it to the canyon before you even get a shot off." I'd like to think the ranch owner chose the two of us for a reason. In pursuit, we seldom give up and let an animal beat us to a canyon for cover and today was no different. I flung my door open and used the mirror on the pickup for a rest to put my first round in the target. My partner was coaching me as he was filming because he has much experience in hunting South Texas Whitetails and Nilgai which requires shooting at animals on the run. 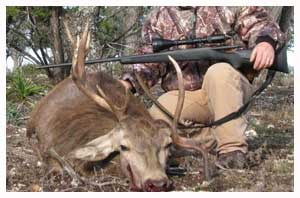 After I squeezed off the first round the deer didn't react like I wanted. I put one more round in the deer and noticed that he jumped a little but was still moving toward the canyon. I started to think this deer was going to escape into the canyon and I only had one shell left in the Ruger 25-06 I was shooting. The deer didn't appear to be slowing down so I shot my final round and hit him. But he was still moving, then my partner put the final shot on this incredibly tenacious animal as he ran directly away from us toward his home in the canyon.

It was the final round from a .300 ultra mag that my partner was shooting that dropped the tenacious red deer. When we made our way to the fallen deer, we found that the deer was hit several times and was going to expire but not as quickly as we initially thought. The deer had a very unique antler scheme. He had several forks and points on his right side but his left side was really unusual and ‘freaky’ looking. We found out later that he had a broken skull cap and that had caused him to grow a deformed looking antler. He is very unique and will end up on a wall at the ranch somewhere. A special thanks to all the folks at Escondido Ranch for all their support and hunting opportunities they continue to provide us.