Through the Eyes of a Trophy Sika Buck

When writing a recapitulation of an exciting hunt at Escondido Ranch I speak from the hunter’s perspective. In this instance I am going to make an exception because this particular Trophy Sika Buck managed to escape the cross hairs of a .243 not once, but twice. And even though the animal was eventually harvested on the third day of the hunt I am willing to give the victory to the Sika Buck. So here goes the story from the Sika deer’s point of view:

The morning started out with a little breakfast consisting of some remaining acorns under some big oaks on a plateau just above the river. My Elk buddies and I like to bed down here at night and then cross the river in the morning and steal some leftover corn and deer protein from the nearby pasture before we make our journey up the switchback. Onward we go through the gravity pasture and eventually down into Eli canyon where we stretch out for a nap for the remainder of the morning and early afternoon. Yea, I have to admit, life at Escondido Ranch is pretty amazing. We sleep in everyday and the food is excellent and plentiful. 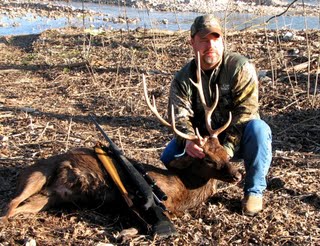 I did have a close encounter the last couple of nights that nearly sent me straight to the top of somebody's fireplace. Can you believe someone tried shooting me at 140 yards last night, but missed completely?! I felt so bad for the guy that I decided to give him another chance the next evening at about 80 yards but he made some excuse like it was "too dark." It was great because the whole thing was on video. Whoever was holding that camera sure did a good job as they never took their eye off of me. I'm thankful that the guide who was shooting video did not have the gun or I would be singing "The Day the Music Died" by the late great Don McLean.

Typically, if we make it to Sunday afternoon it means your safe and can rest until next weekend rolls around. All I had to do was make it one more day and it was smooth sailing. Sunday morning came and what a beautiful morning it was as the sun came up over the backdrop of Escondido Ranch and reflected off of the gorgeous Llano river that runs through the middle of the ranch. We bedded down in some thicket just up from the river that we crossed late last night. As we started our morning I was feeling a little frisky and felt like a sparring match with my buddy who is a 5x5 Bull Elk. I was overmatched but I still put up a good challenge. After our early morning joust I started across the river in search of leftover corn and protein pellets. I made it just to the edge of the low water crossing and that's when I knew I was past the point of no return. I must congratulate the hunter/rifleman because he never made any noise or give up any scent. He must have been some 250 yards away. Someone must have been tracking my Elk friends and I for awhile because they knew just where to be at just the right time. Before I leave you should know that I was truly a Gold Medal Trophy Sika Buck and well worth the hunt. I enjoyed many meals and memories at Escondido Ranch and I hope ya'll will do the same.

Until next time keep on shootin' straight and shootin' often. Peace.

What is the history of the Sika species in other countries? 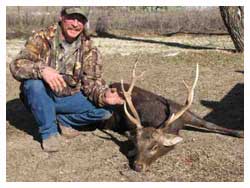 Although considered a highly prized trophy animal in North America and even in Europe, they have also been seen as sacred animals in the Japanese culture. The largest natural population in Japan was in the area of the island of Hokkaidō, where they were even used as domestic animals for meat. Over hunting of the wild herds almost caused extinction in the areas around Hokkaidō, however they were declared a protected species in the early 1900's and the population rapidly increased again until they reached their former levels. Currently regulated hunting is again permitted to help control the population and avoid over-competition for forage with livestock.
In several areas of Japan including the scared temple cities of Nara and Miyajima the Sika deer roam around the cities with the tourists. They can be fed by hand and are very tame and accepting of human contact. In other countries such as the Britain, France, Australia, New Zealand, Germany and Denmark there are both managed herds and completely wild populations. In European areas the Sika deer will breed with native Red Deer, resulting in a hybrid species that is considered to be a risk to the preservation of the purebred Sika and Red Deer populations. In the United States the species is found in wild and managed herds in Texas and Maryland. They can also be found on private reserves and zoos throughout the rest of the country.
What is the biggest challenge to hunting Sika deer?
Although they are a moderately large deer species, this deer is an expert at camouflage and blending into the natural surroundings. The experienced hunter may be surprised at the tricks that the Sika deer will use to evade being spotted. They will crouch down and even get into very thick wooded areas and stand amazingly still, allowing hunters to pass at close range without moving a muscle.
The Sika is also fast and runs in a relatively unpredictable pattern when started. They can leap, turn and dodge trees at an amazing speed, plus they are notoriously hard to hit with a kill shot unless the hunter is very accurate. This combination of intelligence, wiles and speed make them a true hunting challenge.