It was Labor Day weekend. My family and I were once again fortunate to be invited to Escondido Ranch for the weekend festivities. The days were spent riding ATVs, swimming in the river, shooting clays or just relaxing on the balcony with a cold drink and a laid-back conversation.

The early mornings and the evenings, however, were spent hunting! The first evening, I decided to take along my son. Knowing that hunting with an active 4.5 y.o. would be a challenge, I conceited that the evening would be spent looking at the wildlife. To make certain we had some wildlife to look at, we hunted at Windmill blind which is elevated 25-30 ft off the ground. Throughout the evening, we had several glimpses of black buck antelopes and distant sightings of whitetails. In between, my son was thoroughly involved with a slim digital camera; taking photos of himself and the surrounding country side. Some photos actually came out pretty good.

The following day, I decided that it was time to do some serious hunting. So I left my son in the company of Mommy and younger sister and tracked out on my own. It was still humid that evening from the torrential downpour the day before, but you could feel a distant encroachment of autumn. The days were getting shorter and in the evening, the temperature was notably cooler.

That late afternoon, I set out towards the Ambush blind. This particular spot is located off the beaten path, on an edge of canyon 95 yards up the slope and 130 yards away from the feeder, as the crow flies. The “blind” is really a 3x8 foot wall of pilled brush with a 2x4 thrown across two trees for shooting support. Getting down to the blind could be a bit of a challenge as well, particularly in the early morning hours. You have to follow a marked trail which winds down through the trees and stops just a few feet short of the ledge. However, I particularly like 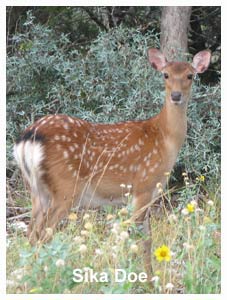 this spot, because it offers the freedom to move around (carefully) while having a clear view of the shooting lanes. The area below is a favorite hangout for axis, hogs and aoudad sheep. I was ready to take on all comers.

Once I got situated, I found a solid rest for my .270. This is a recent acquisition and my second time hunting with this rifle. I feel progressively more confident with the gun, particularly after a shooting session from 300 yard distance, earlier that day.

The evening started slow. Only one porcupine and a couple of squirrels were scouring around below. A bit later, a huge, lumbering “Sumo” porcupine slowly worked its way towards the feeder. It was the largest porcupine I have ever seen. It dwarfed the other porcupine still munching nearby. Whatever protein mix the ranch used as supplemental feed, if it has the same affect on the deer, it should produce some major trophies this season.

Finally, around 7:15 pm, an Axis doe showed up. There was still 45 minutes of shooting light left. I was still hoping to see my elusive prey of choice, the Aoudad, so I decided to pass. The doe pranced around the area for a few minutes and then disappeared in the nearby brush.

Time passed. It was just me and the two porcupines. The view through my scope was still clear, but I was loosing shooting light. I was second guessing myself for passing on the Axis doe.

I had only a few minutes of light left, when the same doe popped out on the other side of the feeder. Ecstatic about the second opportunity, I wasted no time in drawing my rifle. I found the Axis doe in the scope and removed the safety. Its head was down and the vitals were blocked by remnants of a fence post. I waited…When the doe finally cleared the obstruction, I squeezed the trigger. Through the clearing smoke I could see the animal fall hard to the ground. Oh yeah! Axis back strap on the menu…Yum!

When 20 minutes later, along with Kurt (our host at Escondido), we drove down into the canyon to pick up the doe, I was taken back by the discovery that I actually shot a Sika doe. Oops?!!

From my perch, 130 feet away, I was convinced that what I was seeing was, in fact, an Axis doe. The same coloration, the same size, the same features ….or were they?

Upon a closer inspection of the doe; two distinct variations became apparent. Unlike an Axis doe which has a white throat patch on the neck, a Sika doe has a tan neck and an apparent, fluffy rump. I was accustomed to seeing solid colored Sika does at the ranch, so when I saw a typical Axis pattern of white dots on a tan hide, it did not even occur to me to consider other possibilities.

Furthermore, to add another twist to this saga, Fallow deer, which are abundant at Escondido ranch, could also come in an “Axis” pattern. The most distinguishing feature for Fallow doe, however, is the pronounced Adam’s apple along with an elongated neck.

At the end, after a series of jokes and cute comments at my expense, we left the Sika doe in the walk-in cooler and went back to the main house for a gourmet meal of grilled Red Snapper and boiled jumbo shrimp, products of our spearfishing forays into the Gulf of Mexico.

Spearfishing, which is a passion (borderline obsession) we share with Kurt is another story altogether...

How distracted are Axis does coming into a feeder location?

On exotic hunting ranches such as Escondido Ranch, the animals are very used to the locations of the feeders as well as the placement of the stands or blinds. As such they are often highly distracted when they are arriving, one of the most useful of the Axis doe hunting tips we can provide. Since they are busy checking out all of the other does at the feeder, including ones from other groups, you may see a lot of interaction between the does. Occasionally two mature does may even fight in a fashion very similar to the bucks, jumping up and pushing each other with their heads, legs and bodies. 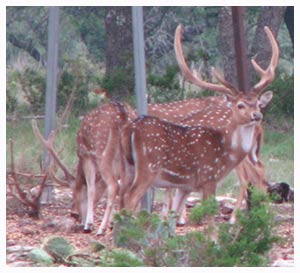 This can provide some very unique and beautiful wildlife photography or videography options, plus of course you will also have a chance to check out the does that are at the feeder while they are all focused in on the battle.

What Axis doe hunting tips are available for handling the beautiful hide?

If you want a very memorable and gorgeous addition to your hide collection you will definitely want to take the hide of your Axis doe as part of your reward for a successful hunt. The absolutely stunning deep coloration and the white spots forming the lines down the length of the body are idea as a wall hanging, a throw for the back of a couch or over a table or even as a rug. Talk to the guide and have the hide packed appropriately so it can be cleaned and prepared by your taxidermists. It is important to get the hide in for preserving as quickly as possible as waiting too long will result in hair loss and may even make it impossible to preserve with the hair on.

How often are Axis does found away from the herd or group?

Axis doe hunting tips and strategies always include hunting within a herd as these does virtually never split away from their group. The herd instinct is so strong with these animals that they just don't wander off on their own. The only time you are likely to see an Axis doe by herself is during the birthing process and if she is injured or ill. It is amazing to watch these animals even when startled as they whole herd seems to move as one, staying in a group even when fleeing.
As such it is important for hunters to wait until the whole herd arrives to the feeder or along the path before deciding which Axis doe is the right one to hunt. By shooting too early you risk the chance of not seeing the whole herd as they will take a few minutes to all arrive at the feeder. Typically they approach the feeder slowly and carefully, then when they determine the coast is clear or there are other animals already at the feeder they are much less hesitant and more interested in feeding and defending their territory from other groups of does.

Why do most Texas hunters recommend using a blind?

A blind is one of the not so secret of the many Texas doe hunting tips. One reason a blind works so well is that it is elevated above the line of sight for the deer as they come into the feeder or as they walk along the trails. Deer are not naturally going to be looking up for predators; rather they look down and horizontally along their natural line of sight.

Another reason why Texas doe hunting tips often include the use of a blind or stand is because in Texas, unlike in many states, it is legal to feed the deer to bring them into a designated area. Setting up a blind or stand in this situation practically assures the hunter that some type of game animal will come up to feed, establishing a pattern that the hunter can then use. In states and areas where feeding is not permitted, stands or blinds are not as effective as there is no way to specifically draw the deer or animals into the area where the blind is located. 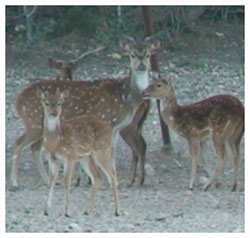 What are the key elements of safety with Texas doe hunting tips?

It is always so important to know where everyone in the hunting party is located at all times to avoid any potential hunting accidents or injuries. It is amazing how many hunters don't always know when others are in the area or where they are specifically located. On Escondido Ranch hunting from blinds only ensures that all hunters are safely located in a confined space, above the line of fire from anyone else hunting from a blind. This is one of the biggest Texas doe hunting tips that provides safety for everyone involved.

Another of the safety conscious Texas doe hunting tips is that the staff at the ranch checks out each blind or stand on a regular basis to make sure it is safe and secure. Any repairs that are needed are completed immediately, ensuring that everyone is in a very well built, secure blind or stand at all times.

When is calling for does the most effective?

If you are going to try to call in the deer, Texas doe hunting tips on this topic state that the best time is in the late spring and through the fall when the does are "talking" to their fawns and the juvenile members of the herd. The two most important types of calls that can be used to attract does is a typical fawn call, almost like a bawling sound, and a higher pitched distress call that signals to the doe that the fawn needs help. Curious does will investigate a grunt call as well.
There are several CDs and videos that are available through various deer hunting clubs and websites that provide good quality recordings of these sounds. If you are going to try this, be sure to start practicing a few weeks in advance and get your calls down before you are actually out on the hunt.