Aoudad in the Crosshairs

After a morning of blistering cold weather, the afternoon was turning out to be rather pleasant as the temperatures rose into the 50s and the low pressure system moved onto the northwest giving way to blue skies and a patchy network of white clouds.

Earlier that morning, my endless pursuit of the illusive aoudad also known as Barbary sheep forced me to pass on a couple of axis does out of fear of spooking my prey-of-choice. Unfortunately, my fears were unfounded, since on that morning the aoudad either decided to bypass my hunting area or simply stayed out of sight.

Out of all the animals I have had the opportunity to harvest at Escondido Ranch, aoudad sheep continued to remain on the “to-do” list. Imported by ranchers into the Lone Star State in the mid-last century, but native to the mountains and deserts of North Africa, the aoudad sheep quickly took root in the arid hills and canyons of Central and Southern Texas. Build like a Sherman tank, these resilient animals can flourish on scarce vegetation of the region and can live up to twenty years of age. Both male and female of the species can grow large, backward sweeping horns. The male trophy aoudad, however, carry thicker horns of up to 30 inches, sport a heavier mane of long soft hair along their throat, chest and front legs and can weigh in excess of 300 pounds. Although, ewes and younger aoudad congregate in larger groups of up to several dozen animals, mature, trophy caliber aoudad rams prefer a more solitary existence.

An abundance of aoudad sheep at the ranch do not make them any easier to hunt. In the past several visits to Escondido, I have seen aoudad only on rare occasions and for but a few fleeting moments… certainly not long enough for an accurate shot. Although, these sure footed animals prefer to feed later in the day, when not under a lot of hunting pressure, they have been spotted throughout the ranch during all hours. But shoot one, and aoudad seem to vanish without a trace; taking refuge along the inaccessible cliffs of the canyons and gorges around the property.

Due to unseasonably cold temperatures and the resulting damage to the natural vegetation, aoudad along with other exotic game animals at the ranch have been actively grazing at the feeders throughout the day. So, it was with hope and optimism that I strapped my backpack to the front of the four-wheeler, threw .270 rifle across my back and sped off to the area where the aoudad have been spotted that morning. 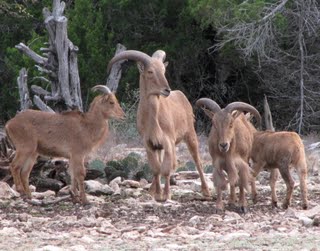 With a favorable wind, the plan was to get into the blind before 4 pm and see what shows up. If activity was at minimum, I would get out of the blind a few minutes before sunset and stalk up to another nearby blind in hopes of ambushing an aoudad there.

In anticipation of the forthcoming hunt, I was anxious to get to my final destination. Along the way, I scattered small groups of black buck antelope and gave a short distance escort to a herd of fifteen or so fallow deer. As I made the final turn leading to the blind, I skidded to a halt…There, within 200 yards, in the middle of the afternoon, right beneath the feeder, stood a large, male, trophy class aoudad ram.

Caught by a complete surprise, I was not sure whether to reach for my camera or my gun. With the gun across my back and the camera in my backpack, both were too difficult to access without spooking the animal. So for the next several seconds, reminiscent of the Mexican stand-off, the aoudad and I stared at each other from afar. When I finally decided to easy off the 4-wheeler, the aoudad mirrored my movements and eased right out of sight. I was sure glad that trophy aoudad rams were not on my list, because otherwise I would have been really, REALLY UPSET!!!

Oh, I have not mentioned that I wanted to shoot a young aoudad. Although, a trophy aoudad looks great on the wall, the meat is not palatable. A young aoudad’s meat, on the other hand, is supposed to be succulent and delicious with taste reminiscent that of veal. So, with an eye-full of a trophy class Barbary ram, I proceeded to stash the four-wheeler underneath an overhanging cedar tree and walked towards my blind about 200 yards away.

After 30 minutes or so of sitting in the blind, I noticed some movement along the tree line, about 180 yards south of my position. Through the binoculars, I could see a tall, narrow rack of 3.5 year old, 8 point whitetail buck being followed by a whitetail deer of slightly smaller stature, but with 1-1.5 inch spikes. The spike deer definitely needed to go, but I was hesitant. I really did not want to ruin my chances at an aoudad. So, dropped a short text to the ranch owner, and luckily I got a pass on the spike. I watched the two deer for a few more minutes before both moved on into the thickett.

The feeder went off at 5 pm and for the next 45 minutes there was very little activity. I had about 30 minutes of shooting light remaining and I began contemplating my stalk to the nearby feeder. I already started to gather my belongings, when along the same trail used earlier by the two whitetails I saw glimpses of moving animals. I raised my binoculars for a better look. Initially, I could only see patches of brownish color blending into the bushes and was able to make out three distinct animals. But then one of the animals moved into an opening between the bushes and my heart began to pound. There it was…an aoudad! Granted, this was a bigger animal than I was planning to shoot, but there were more hiding in the brush. I just needed to be patient. Nonetheless, I was not taking any chances. I raised my gun, and with safety engaged, started glassing for a shooter aoudad. 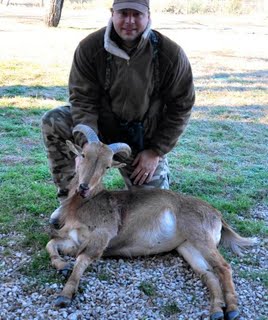 With the shadows growing longer, one of the older aoudad ewes finally stepped out into an opening and cautiously proceeded towards the feeder…and gradually, the rest of the herd followed at a respectable distance. I could count 12 animals in total. At least two of the older females with large sweeping horns and long flowing beards would have made fine trophies. But there were also three young aoudad with horns 12 inches or less. Those were my targets. The animals continued to bunch up at some distance. It was only after the lead ewe finally approached the feeder and started chewing on the scattered corn did the rest of the herd trotted over to join her.

Pushing, showing, bumping and budding was the order of the day as young and old tried to muscle their way to the feeder. Meanwhile, with the herd a mere 80 yards away, I was almost holding my breath afraid to make any movement or sound. The crosshairs of my gun were right one of the smaller aoudad, but with all the commotion there was no clear shot.

Finally, after a seeming eternity, the young aoudad tried to push its way past a mature ewe and she simply shoved it aside with a flick of her head. For an instant, the young animal found itself outside of the feeding frenzy and with no other animals directly behind it, I removed the safety and pulled the trigger! Kabooom! The force of the impact swung the aoudad around and rolled it on its back. There was no other movement. The rest of the herd scattered in a blink of an eye. I pumped my fist in a victorious overture and with great anticipation climbed out of the blind, briskly walking towards the downed aoudad.

There it was, a beautiful specimen of the species which had eluded me for so long... but not TODAY! The deed was finally done and one more species was off my list. With the harvested animal secured to the front of the 4-wheeler I proceed to the cleaning area in the valley below.