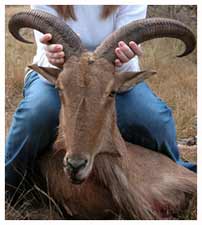 What is the average lifespan of the Aoudad Sheep? 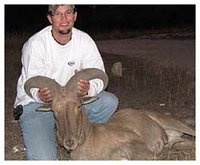 In the wild under good conditions the Aoudad sheep can live to be up to 20 years, longer in captivity. They are very hardy and are not susceptible to the drought and low forage problems that can affect the native species. They can actually go without water for long periods of time and their bodies are able to extract enough water to survive from meager amounts of vegetation.

The main breeding season runs from the first part of September through to the end of November with offspring born from March through to May. Like many species, the Aoudad can breed throughout the year and females will come into season between 18 months and 2 years of age.

Newborn sheep are extremely athletic and can climb around on very rocky and rough terrain
within just a few minutes after birth. The females are very protective of their young and keep them close by until about 4 months of age when they are weaned.