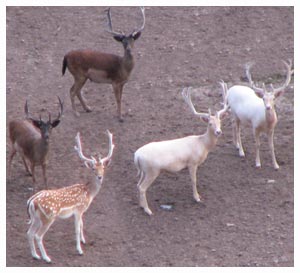 There are 6 fallow bucks below the house at the feeder tonight, and these sika bucks and elk between Betty’s and gravity. There was a hog chasing blackbuck does this am at tree, Betty was pissed, wanted me to drop everything and go kill the hog, but Lawrence is not on the ranch so I would have to clean it, not what I like to do before breakfast! It has been overcast and cool every day with sporadic rain, the high yesterday was 85, today 90! I have been working on roads and opening a new calachie pit between buck and intersection, we are trying to calachie the roads from the main road to buck, party, windmill, Betty’s.